Follow Matt Kenney during his deployment in South Georgia, working as a Boating Officer and Coxswain for the British Antarctic Survey.

Read Matt's posts with news, reviews and extracts from his Journals, and see photo and video posts to show you some of the work the Antarctic Survey are doing in the Southern Ocean, and also provide an insight into life on a British Antarctic research station.

Matt will also provide accounts of his work at sea and ashore on Humber Destroyer RHIBs and 11m twin jet drive Pilot vessels along side the team at the King Edward Point research facility.

Matt arrived in South Georgia on the 28th October 2010.


One of my infamous catch up blogs after not updating the site for an embarrassing number of months... The time which has elapsed since the RAF air drop can accumulate a lot of waffle in my world... I must remember to blog little and often.... little and often....
November saw the arrival of an exciting project being undertaken by BAS Scientists Gabbi Stowasser and Chester ‘Cheps’ Sands and a Biological masters student Jana Doemel from Germany.

The team wanted to undertake sampling of the seabed at various locations around the Cumberland Bay area to investigate the local benthic (meaning sea-floor) flora and fauna, and the project required a boat to carry out trawl work with a ‘Benthic sled’ and some accompanying work with a domersal trawl net . It was therefore up to me to convert one of our RIBs in to a suitable trawler work platform.  I decided the most suitable boat for the job would be ALERT with her dive rib layout and open aft deck.  So with some cunning modifications, she was transformed into perhaps the world’s first RIB trawler (!) making use of some now rarely used fishing tackle in the net store, including floating line, heavy trawl line, cheek blocks and swivel shackles. The makeshift system worked perfectly and boat proved very capable whilst accumulating around 13 hours of trawling.  The team were overwhelmed by the samples that were recovered and they will provide a significant contribution to the marine science being undertaken by many nations around the Scotia Arc.  The trawling was great fun, and we were very lucky with the weather.  The RIB actually coped incredibly well with bottom trawling, and with both engines in slow ahead, made a perfect 1.5 knots with the trawl sled fully deployed on the seabed.  It was fascinating to see the diversity of life that was bought up and put into sample buckets.  Jana’s particular area of interest is sea spiders, and we actually recovered many different species much to Jana’s delight.  In addition we found many varieties of copepod, isopod, amphipod, echinoderms (starfish!) and other bits and bobs. 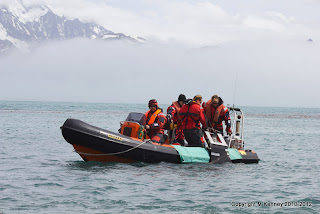 Of particular interest to me was the requirement for the boats to go and explore some lesser frequented spots around the coast.  We spend a fair whack of time cruising in to beautiful spots like Sandebugten cove, Moraine Fjord and even little Jason lagoon.  Little Jason is a tidal lake in Jason harbour on the Busen peninsula, and is only accessible by RIB on spring high water.  As there is usually no reason to make the journey in to LJ lagoon it is almost certainly the case that no boat has been inside since HMS endurance made some soundings of the lake in the early 1990s.  Crossing the bar was exciting, as fur seals leaped from the water across our bows and the last of the late flood poured in through the entrance making rapids on the shallower eastern channel. 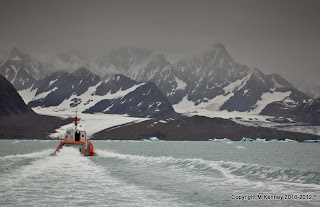 The trawls inside the lagoon were somewhat disappointing, as it was hoped that because the lagoon is protected from ice scouring, the benthic marine life could be abundant.  In reality, what was recovered was a large amount of pungent smelling sludge.  It is my (non-scientific) opinion that the shallow ledge at the entrance, the small change of water each tide, and the abundance of fur seals around the lake have eradicated much of any marine life in the cove.  Due to tidal constraints we only had time for one trawl however.  Before leaving, I drove the boat around the perimeter of the lagoon and photographed the beach for the seal biologist.  On returning to base I counted around 750 fur seals on the beach.
Posted by Matt Kenney at 21:32 1 comment:

Take the time to:
. Visit my YouTube Channel.
. Look at my Photo Albums.
. Browse the RSS newsfeeds from the BAS website and the Maritime and Coastguard Agency
. Search South Georgia Journal with the Search Box.

. Plug in to my sites feeds and keep updated.

Thanks for stopping by, I hope you enjoy the site. Watch this space for more regular updates. Please feel free to comment on any posts, and I encourage you to give me some feedback on the site. Thanks, Matt K.

BAS is a member of the Natural Environment Research Council